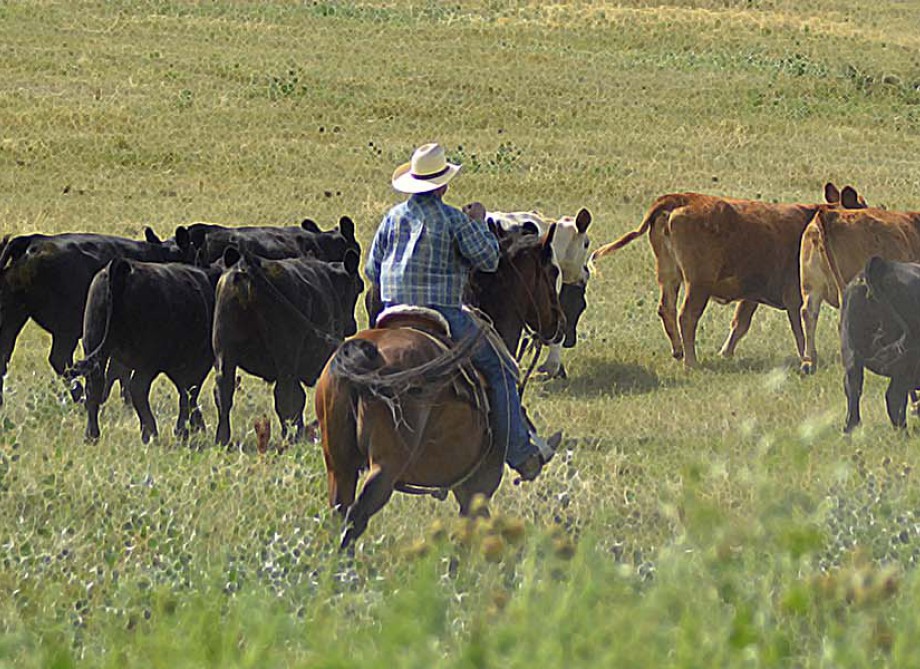 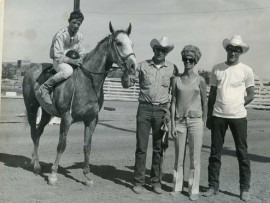 A teenage Dale in the winner's circle as a jockey

Growing up the son of successful Montana trainer, Dale had few doubts of what he wanted to be in life and at the tender age of 12, he took the first step on what has turned out to be an exciting journey in the racing world.

That first step was into a stirrup and that stirrup was attached to a racehorse and that very first race turned out to be a winning one!  Firmly hooked from that point on, Dale went on to jockey his father’s horses (many of which had been traded for hay with the legendary Johnny Longden)  throughout the Western region; even tying for the riding title at Fort Benton, Montana-only to lose to official title and the buckle on a coin toss!

After outgrowing the jockey’s saddle at age 20, Dale traded his riding license for the training version and started off with a bang by saddling the incredibly fast Quarter Horse filly, El Chickadee.  The top ranked two-year old Quarter Horse of her year in Montana, she won her first three starts for Dale.  Another early success included a Divisional Championship in the sport of chariot racing, which Dale won with a team comprised of a Quarter Horse filly and a Thoroughbred colt.  He also started the Paint stallion, Crafty Cochise, to a season that saw him become 4th ranked in the nation by the American Paint Horse Association. 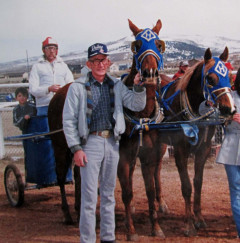 Dale at the helm of his championship chariot racing team

Dale went on to hold training licenses in six states and trained numerous winners in both Quarter Horse and Thoroughbred races.  Also an accomplished farrier, he has shod his own horses for over 25 years. While he might not have been the leading trainer at every meet, he ran on hay, oats and good training-not Lasix or Bute.  He never once broke down a horse…and considering he mostly ran on half or 5/8 mile ovals with less than good track surfaces, during mixed-breed meets with homestretches packed hard by 400-yard Quarter Horse sprints, that is quite a feat!

As the breeding side of Horse Creek Thoroughbreds took root, Dale quit training in 2000 to focus his energy on the breeding and sales preparation side of the racing industry.  At one point, the ranch housed an active breeding program of 30+ broodmares and two stallions.  Yearlings were sale-prepped for the central Kentucky sales or a secondary market, the Silver Cup Sale at Arapahoe Park in Colorado.  The farm enjoyed support from small, regional breeders who intended to race at Midwestern tracks. 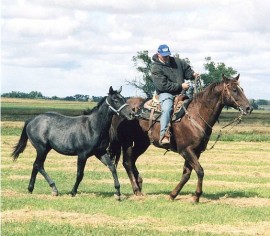 His focus changed again in the late 2000’s when the Thoroughbred breeding and racing market stumbled along with the rest of the economy.  Dale had long used his own Thoroughbreds for ranch work, doing day jobs for neighbors and using the cattle work as a way to keep his racing stock’s mind fresh during and between the racing season.  When the horses completed their racing careers, they easily transitioned into new roles off the track. He now looked at that training regimen as a new opportunity and thus began the Gate to Great program.

The first horse to go through the program was Wicked Walt, a little grey gelding who hardly lived up to his ferocious name.  Walt was found while Dale was watching TVG one day and noticed the pretty little grey gelding walking quietly and running slowly.  A call to the gelding’s trainer and an offer to trade a yearling homebred filly soon saw the gelding at the ranch.  After some time off and then re-training as a ranch horse, Walt was sold to become a barrel racing prospect in North Dakota. 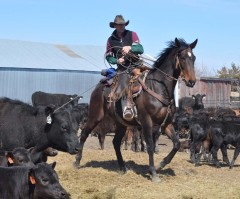 Dale and the gelding "Swingn Slew" working at a spring branding.

Today, Dale works with trainers throughout the Midwest, but particularly Kentucky/Ohio to take in retired geldings and re-train them in second careers as ranch horses. While many of the geldings complete the program and go on into a ranching career, there have been quite a few that have succeeded in disciplines as diverse as pole bending and 3-day eventing.  “Basically, the horses did it,” said Dale in an interview with The Bloodhorse. “I never dreamed it would turn out as good as it has.”