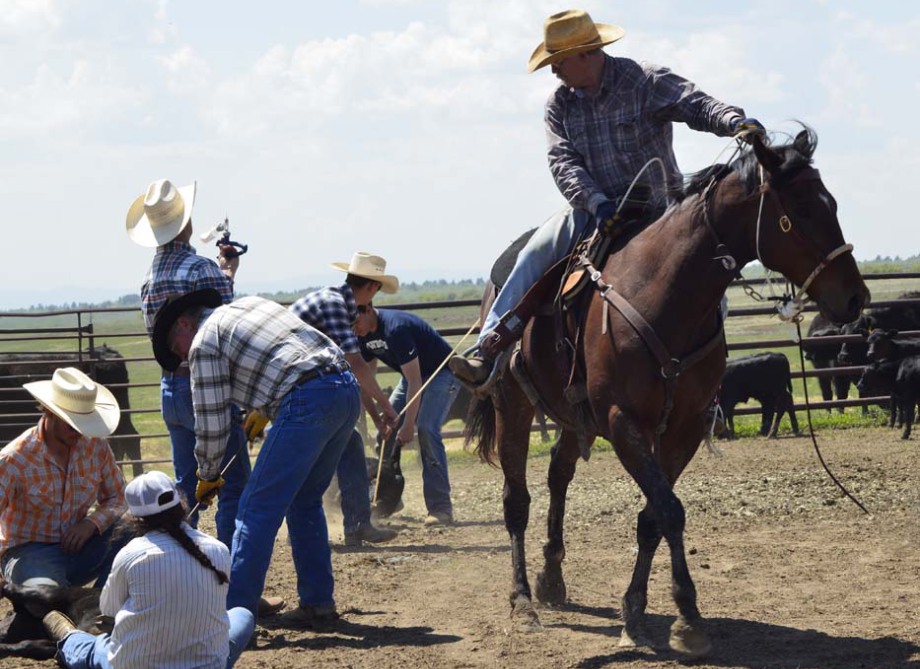 Welcome to a Champion! 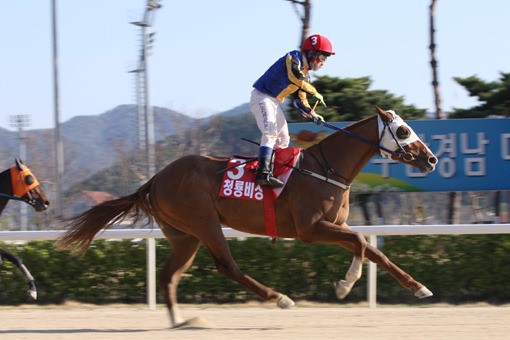 If the text on the saddlecloth in the photo above looks a little unfamiliar, don't worry.  It was a surprise to us too! 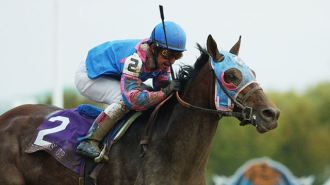 So how did the Two-Year-Old Champion of South Korea end up starting a new life as a ranch horse in South Dakota?  Well, it's kind of a long story.

First, let's talk about his pedigree.  Cheongnyong Bisang's bloodlines will ring familiar to anyone familiar with American pedigrees.  The breeding and racing industry in Korea is relatively young and as such, it features many imported American horses.

Cheonngyong Bisang was foaled February 28, 2011 at Kumak Stud Farm on Jeju Island in Korea. He is by 2002 Breeder's Cup Classic winner Volponi (by Cryptoclearance).  Volponi was a solid stakes runner and is best known for winning the Classic by the largest winning margin in its history- 6 1/2 lengths.

Volponi retired at age 5 in 2003, after a career that saw him start 31 times, with 7 wins and 17 in the money finishes.(read about his full race career here) He attracted 80 mares his first season at stud in Kentucky but when representatives of the Korea Racing Association went stallion shopping in 2005, he wasn't popular enough with American breeders to turn down their offer and across the Pacific he went. 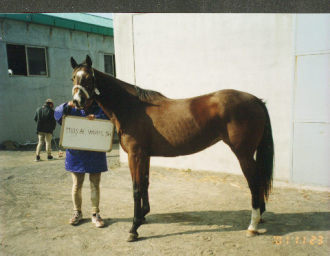 Volponi has become a consistent Top 10 sire since landing in Korea. He was the leading first-crop sire in 2009, a group that included 2010 Korean Oaks winner Dongbang Rose.  He has seen several more of his offspring reach the Group 1 level in Korea in the years since.

On his dam's side, Cheongnyong Bisang is the last of ten foals out of a Canadian-bred, imported mare named Miss Alwuhush (by Alwuhush).  She was a respectable mare at the track--having 7 wins and $97,780 from 40 starts and came from a strong family of stakes horses and sound runners. Her dam, Studio Affair (by Bold Ruckus), was stakes-placed and had 8 wins from age three to six.   Five of her total of nine winners brought home solid six figure earnings during their typically long career (including stakes winners Speak Out (by Victory Speech) and Moon Path (by Perigee Moon)...indicating both class and soundness in the family.  His third dam, Studio Queen, is by Triple Crown winner Secretariat and while she only had the one stakes-quality horse in Studio Affair, she was another solid producer of what old school horsemen call "just plain runners"..she produced a total of 10 winners, including several horses with six figure earnings. 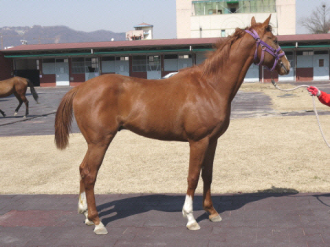 Cheongnyong began his racing career relatively late in his two-year-old year with his first start not coming until August 24 in Seoul.  At a distance of about 6 furlongs over a muddy dirt track, he finished a fast closing fourth.  His next start also came at Seoul, this time over an even worse track, listed as "sloppy", but he didn't let that bother him and he waltzed to a seven length victory.

His connections next tried him in stakes company, but he wasn't quite ready for that step up and was a disappointing fourth.  However, his next out three weeks later saw him fly home in front by fourth lengths and prompted another try in the top class.

On December 1, 2013, he won his first stakes by 1 1/2 length over the best juveniles in Korea--the Breeders Cup, which is Korea's equivalent to our Breeder's Cup Juvenile.  This gave Cheongnyong the lock for Champion Two-Year-Old and set him up as favorite for the following year's Triple Crown races. 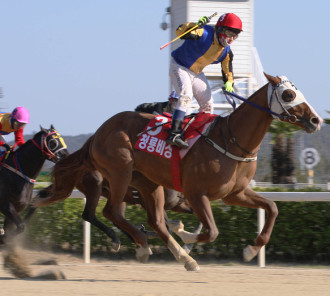 Cheongnyong Bisang started his three-year-old year early, with a solid first-place finish in an allowance race at Seoul in January.  But he next put in an inexplicably poor effort in a handicap over 9 furlongs, finishing seventh.  That poor effort meant that he went off at odds of 20-1 for the KRA Cup Mile, the first leg of the Korean Triple Crown.  After trailing early, he mowed down the field in the stretch and won by a length and a half going away.  His easy effort gave Koreans hope that the beloved flashy chestnut colt might become the first winner of Korean's Triple Crown and he was made favorite for the May 18 Korean Derby. 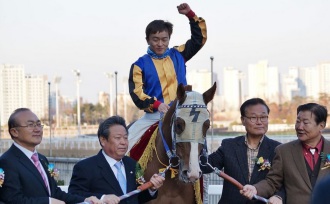 In the winner's circle after the KRA Cup Mile. Photo courtesy of Alastair Middleton.

Derby glory was not to be his however.  In a large field remniscent of its American counterpart, Cheongnyong Bisang raced in tight traffic for much of the mile and a quarter event.  When he was finally able to find racing room on the far turn, he took to the middle of the racetrack to put on his characteristic late move but was unable to make up the ground to catch the runaway winning filly, Queen's Blade. While he managed to explode and pass most of the field in front of him, he ran out of ground and could only manage fourth.

Given most of the summer off, Cheongnyong came back in August and was tested in an allowance where he could only manage a fifth place effort.  He was also dull in his final start of the year, a stakes race in Seoul, and took tenth. 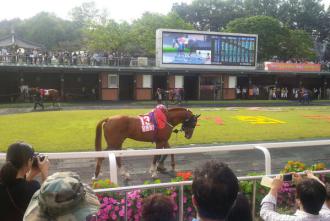 In the paddock before a race in Korea. Note the roached mane, a common style among Korean racehorses.

Korea has a strong recent history of sending some of their best to the US to try them against top international competition.  Cheongnyong Bisang was imported to the US in the early part of 2015 and put into the care of a top trainer at Laurel Park in Maryland.  While in training, he suffered a mild bow and was shipped to Kentucky to recuperate with respected veterinarian, Dr. Ruel Cowles.

At some point it became apparent that while Cheognyong would eventually be sound again, he was unlikely to go back to racing at the high level he had known before.  His owners were not necessarily interested in a Korean-bred horse that wasn't stakes quality and were looking for a way out of continuing vet and board bills.  By then, Dr. Cowles and his family had come to rather like the affectionate and classy chestnut colt and told his racing owners that he would take over ownership and find the horse a viable second career.  They agreed and Cheongnyong thus became a fixture at Dr. Cowles Kentucky farm.

As luck would have it, Dr. Cowles happens to be neighbors with one of our closest friends, John O'Meara of Milestone Farm.  One day they were talking about this chestnut colt that Dr. Cowles had in the pasture and what should be done with him.  It wasn't long after that Dale received a texted photo of what appeared to be a cute chestnut gelding and was asked if he would be interested.

Now it should be noted that though Dr. Cowles had Cheongnyong's registration papers and knew he was from Korea, he didn't know the rest of the colt's exciting life history.  When the Jockey Club re-issued the papers, they removed the race record that had been attached and Dr. Cowles, interested in the horse only has his patient, didn't inquire as to anything further and so Cheongnyong's true identity as an International Champion remained secret.  As far as anyone knew, he was just this random Korean-bred horse with a bow.

At the time, Dale wasn't too sure he wanted to send a shipper out to bring just that one horse home (getting shippers to our part of the country is always a challenge) and so Cheongnyong was put on the back burner while we dealt with the chaos that ensued after a large summer storm tore our ranch apart. But when we sold two horses that needed to head east in July, Dale decided to just take them himself and do a little new horse shopping while there.  And his headquarters while in Lexington?  Yup--Milestone Farm. 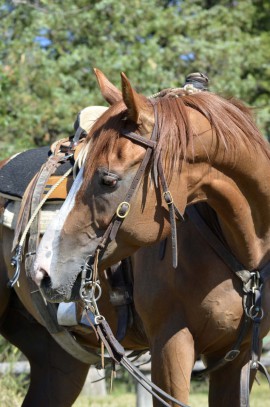 "Doc Ruel" at home on the ranch.

The rest, as they say, is history.  On Dale's last day in Kentucky, he went across the road to meet John O'Meara's neighbor and find out just what he had in his pasture.  Dr. Cowles had gelded the big chestnut and had him turned out with a few mares and other geldings in a large field.  Dale walked in, spoke to Cheongnyong and he immediately came to say hello.  Good-natured, personable and drop-dead gorgeous, Dale told John "I gotta find a way to get this guy home."

And so he came home with Dale to South Dakota.  But we STILL didn't really know who Cheongnyong really was until somewhere on the road in Indiana, Dale finally called Dorothy and asked "Can you look this new horse up for me?"  Dale carefully spelled the complicated Korean name to Dorothy and she hung up and went to work on Google. Twenty minutes later, she called Dale is a rush of excitement-"You have an INTERNATIONAL CHAMPION on that trailer!" she exclaimed.  Dale wouldn't believe her but there wasn't much doubt that the cute chestnut gelding riding home in Dale's old stock trailer was indeed the Champion Two-Year-Old Colt of Korea for 2013.

Cheongnyong Bisang has now been at the ranch for almost two weeks and we are more in love every day.  Although recently gelded, he gets along with everyone and is a fun horse to work with--he is one of those that just plain seems to "like" people and his temperament and manners are a testament to the excellent handling he has obviously received from day one.

We would have loved this horse just the same if he hadn't been a champion but knowing his amazing life story just makes him that much more special.  And since his registered name is just a little bit of a mouthful, we have given him a new barn name--Doc Ruel, in honor of the veterinarian that gave him a second chance and helped make the connection to start him on a second career. 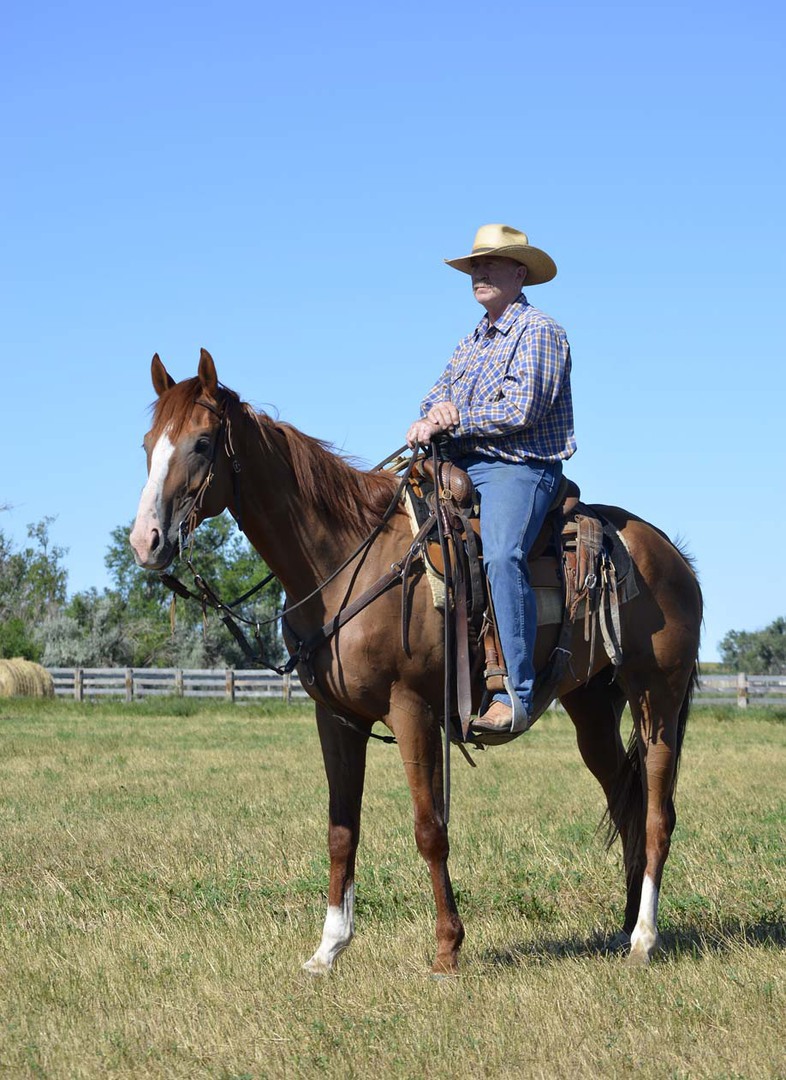